The present Aeolian Skinner Organ was installed in 1970, replacing a two manual Estey instrument, approximately sixty years old, which was one of the few furnishings moved from the former St. John’s church in downtown Phoenixville when the congregation relocated to its present site and buildings in 1962.  Although the former instrument had served well for many years, it simply did not have the qualities required to lead the congregation in its new edifice of soaring roof, stone floors and expanded size.  St. John’s, therefore, agreed to contract with the Aeolian Skinner Company to build a new instrument to serve their needs for many years to come.  Approximately $65,000 was pledged over a three-year period to finance the project.

The “new” organ was installed and suitably acknowledged by a series of dedicatory recitals given by a number of now well-known students of the late Dr. Alexander McCurdy.  However, even in its introductory years, two potential problems arose.  The first was that, primarily because of financial constraints in building the instrument, it did not contain sufficient stops in the softer ranges, desirable orchestral stops, nor was it effective for accompanying vocal soloists, choirs and instrumental ensembles.  Secondly, it became readily apparent that the mechanics of the console were at times not performing properly.

Repeated repairs and consultations revealed that the Aeolian Skinner Company, which by this time had ceased operation, had produced this opus as their third from the final organ, and the console, in particular, was not entirely constructed with state-of-the-art capability at that time.  Further, the console could be updated, but an entirely new replacement could also be built at approximately the same cost. 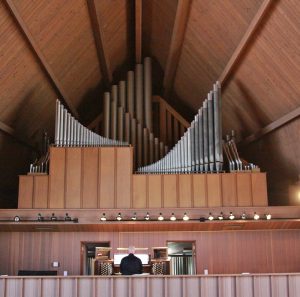 The St. John’s Organ Committee was reactivated and additional funds were pledged and raised for a three-phase project.  Mr. Richard Alexander was engaged as Organ Consultant for all three phases.  Meeting frequently with the committee to determine our musical needs, he guided our negotiations with the Austin Organ Company of Hartford, Connecticut.  The “old” console was sold to the Interlochen Music School in Michigan and a new one contracted to be built by Austin.  Installation was made on January 2, 1993 at a total cost of $60,000.  This new console was built in anticipation of the future expansion of the organ, which would add stops to lend breadth to the instrument for accompanying and solo effects.

The committee, with further advice, visitations and consultation, determined what new voices would be desirable and practical then researched the possibility of realizing them.  Typically, the cost was astronomical to consider the addition of more pipes, nor was there sufficient space to house them without making major structural changes to the church.  Finally, serious consideration was given to augmenting the instrument with state-of-the-art digital electronic additions, which were more affordable than pipes and required considerably less space.

Our interest was directed to the Walker Technical Company, Zionsville, Pennsylvania.  With input from Richard Alexander, Robert Walker and members of the Organ Committee, it was decided that there would be a new all-electronic CHOIR DIVISION, all-electronic CELESTIAL DIVISION (located in the front of the Sanctuary (above the Sacristy), and other current pipe divisions would be augmented with voices to fill missing “gaps” in the original Aeolian-Skinner tonal design.  The results of the expertise and talents of all involved in this project, coupled with the earlier intact Aeolian Skinner instrument are what we now celebrate.  These additions, originally not expected to become a reality for several years, now result from the combination of advance electronic technology accompanied by more affordable cost.

Musicians interested in more information about the St. John’s Organ are invited to contact our Organist, John A. Quinn III

For specifications of the St. John’s Organ, click here.